After the Golden Age, by Carrie Vaughn

... in which Celia, the totally normal daughter of the two greatest superheroes on Earth, fights evil and finds her own way in the world. 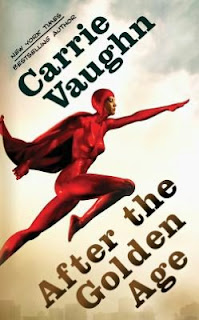 Celia West is the daughter of Captain Olympus and Spark, the two greatest superheroes in the world.  Unfortunately for Celia, she was born completely normal, and her most exciting accomplishment is her silver medal from a high school swim meet.  Estranged from her parents, who were disappointed at her lack of superpowers, Celia now works as an accountant.  When her accounting firm is called in to work on the financials of the Destructor, her parents' biggest nemesis who is about to stand trial, Celia gets drawn back into the world of superheroes and supervillains.  As one of her biggest secrets is revealed to the world, Celia has to learn to contend with bad guys, her parents, and her own place in the world.

Carrie Vaughn has done a great job with crafting a fast-paced, interesting book that is perfect for a lazy afternoon.  Named for the "golden age" of superheroes (Superman, etc), the book is about superheroes and the people around them after the superheroes have passed their peak, but it avoids most of the usual cliches that come to mind when superheroes are mentioned.  The cliches that do pop up are generally treated with a tongue-in-cheek kind of sensibility.

The plot itself moves along at a nice pace.  At no point does the book drag, and the story is fast enough to keep the reader's attention, but not so fast that it feels like mindless action.  There is plenty of drama, both in the action sense and the interpersonal sense, but luckily the book never starts to feel self-important.  What this book is definitely escapist fiction at its best: meant to entertain, with its twists and love stories and action.

The most interesting part of the book is the characterization.  I liked Celia a great deal, though she did tend to feel sorry for herself.  If I had lived her life, though, I can't say I'd have been any better.  She's an interesting heroine, who wants to make a name for herself, and establish her own career away from her parents and their glory.  She wants to get away from the mistakes of her childhood, and she wants to prove to her father that she can be a good accountant, even if she can't fly or lift cars.  Celia's mother and some of the other superheroes in the book are also interesting... three dimensional and unconventional.  Celia's father is probably the hardest to pin down... he clearly expects a lot out of Celia, and he is clearly disappointed in her, but also clearly loves her.  The relationship between Celia and her father (Captain Olympus) is probably one of the more interesting part of the story.

Recommended reading for people who enjoy superhero stories, or quick fantasy reads.  It's not high-brow fiction, but it's entertaining, and fun, and interesting, and that's what matters to me.