... in which a city built on wheels is slowly pulled north on rails, in order to escape the crushing gravitational field behind it.

Probably one of the stranger science fiction books I have ever read, Inverted World requires a high tolerance for the genre of hard sci-fi.  Hard sci-fi, generally considered to be the branch of science fiction that most deals with actual science, tends to be a little less palatable to the general public because there is less talk of light-speed space ships and aliens, and more talk of the mathematical/physical limitations that the technology of modern man faces.  In keeping with the hard science background of hard sci-fi, Inverted World also keeps with the spirit of classical sci-fi in that it is, at its core, an analysis and discussion of the current human condition, albeit in a stranger setting.

The plot of Inverted World is set in the city of Earth, which is basically a large wooden building on wheels. Although the city itself is "civilized", the land it moves through has been ravaged by some sort of collapse of civilization, and most people outside are living on the edge of survival.  Most of the people in the city are unaware of the true nature of the city; the only ones who are "in the know" are the guildsmen.  The guilds are responsible for keeping the city ahead of the gravitational distortion that is constantly moving, and is currently to the south of the city.  The goal for the city is to reach a point known as the "optimum", where the appropriate balance exists between the gravitational distortions to the south and to the north.  However, since these distortions are always moving, the "optimum" is always moving, and the city is perpetually falling further and further south of it.  The main character, Helward Mann, is a young man who has recently joined the guilds.  Apparently the guilds enjoy teaching through experience, because the norm is to throw the young apprentices into their work with no explanation, and to let them find out the weird truth of reality for themselves.  Over time, as Helward begins to realize just how strange and dire the city's circumstances are, he begins to understand why the secrecy surrounding the guilds exists.  As he begins to subscribe to the guild secrecy and guild doctrine, his new wife, Victoria, starts pumping him for details on why the guilds exist and what it's like outside of the city.  As the city's situation becomes more and more desperate, the people of the city begin clamoring for change, and while outside of the city, Helward meets a young woman named Elizabeth who has an important revelation for Helward and the other inhabitants of the city of Earth.  Although Elizabeth's big revelation is deliberately obvious to the reader from the beginning, it is, of course, a complete paradigm shift for the people of the city.

It's very difficult to describe why the world is distorted, and in what ways the world is distorted, without adding significant spoilers to the review.  I will try to discuss the story without spoilers, but if you are curious, a more thorough discussion is included after the jump below.  Fantastical setting aside, this story could easily be read as a political allegory.  Helward starts out as a bright eyed young recruit, naive to the ways of the world and not quite prepared for the importance of his role in the guilds.  At first, the secrecy seems ridiculous to him, but over time, he falls into a pattern of acceptance of guild doctrine: this is how it was laid down for us, it's always worked, it will always continue to work.  Even as the city erupts into revolution, Helward clings tightly to his outdated doctrine, refusing to believe the news that Elizabeth brings.

The guilds themselves are pretty draconian in the way they deal with both the residents of the city, and the people who live in the lands outside of the city.  Because they need more physical labor than is available in the city, the guilds must employ men from outside the city.  They do this by offering the villages food from within the city, and because the villages are starving, they generally accept the poor offerings.  Even if they didn't accept, the city's militia would soon come through and wipe out any opposition.  Worse, the city's birthrate has become dangerously skewed in favor of male babies, with the estimate at 76 boys to 14 girls currently living in the city's nursery.  Because of the desperate need for females, and because this birthrate bias only exists with women born in the city, the city "borrows" women from the surrounding villages, for the purposes of reproduction.  If the woman gives birth to a girl, the girl stays in the city.  If the woman gives birth to a boy, then the woman can either take the child with her or leave him behind when she is returned to her home village.  The city's imperialistic attitude towards the people around them does eventually come back to haunt him, when the villages around them begin to revolt.  And because the city only moves at a rate of about one mile every ten days, they can't exactly outrun the rioting natives.

I really enjoyed the intricacies of the geometric anomalies that the people of this book encounter; clearly Priest put a great deal of effort into the physical setting.  It adds a great deal of urgency to the city's mission, and explains why the guilds are so dedicated to a system that seems to work, albeit imperfectly.  Like I said before, the majority of the truth that Elizabeth brings to the city is never hidden from the reader, so the ending is not a great twist for the reader.  Because the majority of the book is told from Helward's perspective, and he spends most of his time outside of the city, it's hard to get a continuous picture of the gradual increasing unrest with the city's population.  I would have liked to have seen more of that, because from Helward's perspective, the guilds went from ignoring the dissenters one day, and then pandering to them the next.  Helward's seemingly backwards character development is also frustrating, since he went from questioning the antiquated system to accepting it with zeal.  I suppose this was  a necessary plot element, for reasons that are hard to reveal without ruining the ending, and it served as a good plot device for demonstrating the power of culturally entrenched dogma.  The ending was a little bit of a let down, as it was really open.  We don't know what will happen to the city and its people, now that their world has been turned upside down.  If you're a fan of open endings, you'll probably like this.  I am not generally a fan of open endings, except in special circumstances, so this was a little unsatisfying for me.

In short, this is a really satisfying read for fans of hard sci-fi, and is only slightly diminished by the limited perspective of its main character.  Although it was written in 1974, the writing doesn't feel dated at all, and the subject matter remains as relevant today as it was in the 70s.  For readers who don't have at least a rudimentary understanding of physics, calculus, and geometry, however, this might prove to be a bit of a challenging read.

4/5 stars.  Continue reading for a lengthier discussion of the weird geometry of the city of Earth.  Spoilers!!

The city of Earth is subject to a weird energy field that causes massive distortions in gravity, time, and space.  Rather than a spherical planet and sun, the world is shaped like a hyperboloid; that is, if you plotted the equation y=1/x, and rotated the resulting plot around the y axis, you would get a flat disc extending to infinity on the horizontal plane, with a vertical spike in the center, also extending to infinity.  It is remarkably difficult to find the right picture of the three dimensional shape online; all of the image results show the results of a different hyperbolic equation rotated around an axis.  So, you'll have to make do with this 2D graph and your imagination: 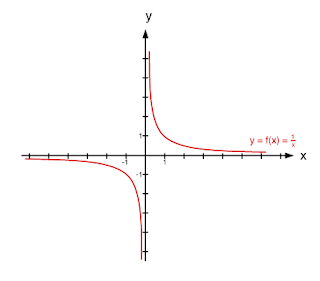 The "optimum" for the city exists where y=x; that is, when x=1 or -1 and the slope of the curve is 45 degrees from the horizontal.  When |x|<1 (north of the city), objects appear to be stretched tall and thin, and eventually everything is infinitely tall and infinitely thin, ie, stretched.  When |x|>1 (south of the city), people and objects gradually become infinitely short and infinitely wide, ie, squashed.  The gravitational dilation also leads to time dilation; the extreme gravity to the south means that relative time is slower in the south.  Helward goes south and is gone for what feels like three or four days; he returns to find that two years have elapsed.  Inversely, Helward goes north and is gone for a month, and returns to the city to find that only a day or two have elapsed.  At the optimum, gravity, time and space are all as they should be.

Although the people of the city believe the optimum is moving, what is really true is that the optimum is stationary, but the world itself is moving, so in order to stay with the optimum, the city must always move.  Because of the time and space dilation effects, as the city falls further south of the optimum, it becomes more difficult to catch up.  I will not reveal why the world is shaped like this, though the revelation will be very obvious to the reader.
Posted by Emily at 10:20 PM